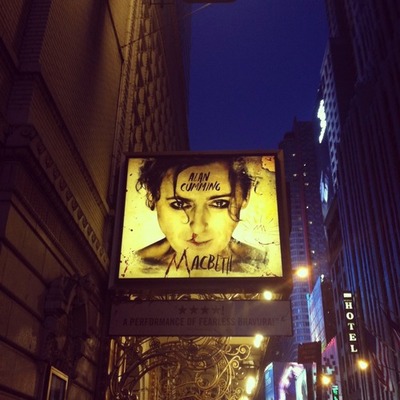 As I’m out, about, and away from my books tonight, I’ll be changing things up a little. Less poem, more backstory, mainly because I’m not sure how well I’m going to be able to format what I want to post, which is something easily found, but difficult to render from a phone.

A year and a bit after I discovered my first poem, I read my first play. My parents told me at the end of the school year that they’d finally gotten me a place in the Catholic school on the fancy side of the river, and that I’d be starting the Fifth Grade there in September. They promised it would be more academically rigorous like we all wanted, which it was, and that I’d make loads of new friends, which I didn’t.

Not knowing that I was to spend the next three years effectively friendless, I was worried I wouldn’t be smart enough for all my new pals. I’d taken CCD classes at the school every Sunday in my years on the waiting list, and had once bitten through my lip trying not to cry when a teacher laughed at me for not knowing what a paragraph was. I tried to explain that I knew what it was, only didn’t know there was a word for it–a theme that would follow me through my academic career–but by then I was already bleeding.

Determined not to have anything like that happen again, I finished our required summer reading and assignments in the first two weeks of vacation, then spent the rest of it trying to keep up that same momentum. I read everything I thought I should until I got to the dusty volume of Shakespeare on one of my parents’ bookshelves. In my mind this was the real stuff, the stuff my future classmates would have been privately tutored on before learning how to tie various sailor’s knots on their parents’ boats. When I couldn’t understand or like any of the pages I tried, I began to despair in the way that only a ten-year-old can. I flipped around until I saw the word, “Scotland,” a place I had never been to, but had many romantic notions about.

Macbeth, with all its ghosts and gore, wound up being just the thing for me. A lot if the time I didn’t grasp what was going on; fate, destiny, free will, and kinship were not concepts that got me going. But monsters–both supernatural and human–those I could understand. I’d sit by my window and count the owls and crows, take extra notice of empty places a ghost might be sitting, stay up late to reread the Weird Sisters’ scenes to spook myself before bedtime.

I was disappointed when the school year started and I found out that my classmates not only didn’t care about what was foul or fair, but hadn’t done the summer reading. I did, however, love that I could name my favorite play (cursed or not) if anyone should ask. Twelve years later, I think I’m supposed to specify that it’s my favorite Shakespearean tragedy, but that’s not it.  It’s still my favorite and I’ve dragged anyone who’d let me to every production within reasonable travel distance.

As I type, I’m freshly back from Alan Cumming’s astonishing performance, and am in love with the little play of horrors all over again.

Just the thing before bed.